The Game Graphic Glitch Gremlin is a gremlin that is the main antagonist in Angry Video Game Nerd episode 92 (Game Glitches) and a minor antagonist in 93 (Zelda II). He is responsible for causing glitches in games though he is also capable of causing glitches in the real world. He was mentioned in episode 118 (Big Rigs: Over the Road Racing) and again in episode 161 (Super & Virtual Hydlide). He appears in episode 156 (EarthBound) inside of the Nerd's memories, though this is archival footage from Game Glitches of him saying "I shit all over it, with me glitches" on a loop. He also appears briefly in episode 159 (Tomb Raider Games), though as just archival footage yet again. He also made a cameo in episode 198 (Commodore 64), yet again as archival footage.

In order to annoy the Nerd, he causes the games to glitch. He has a fondness of this. He has a phobia of Q-tips.

He is a power-up that can be used up to two times. When used, everything (other than the nerd and himself) will stop moving. The enemies, hazards (they'll still hurt upon contact), and the screen will become glitchy for a short period of time. 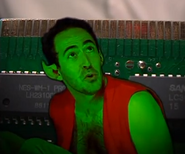 The Glitch Gremlin inside the Nerd's game.

A glitched sprite of Mike Tyson, some more of the Glitch Gremlin's handiwork.

The Glitch Gremlin coming out of the Nerd's game.

"I shit all over it, with me glitches." 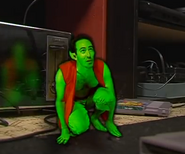 "Oh, you're a real asshole!" (Notice the reflection is incorrect) 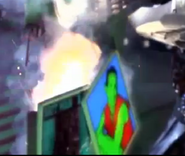 The Glitch Gremlin's cameo in the movie